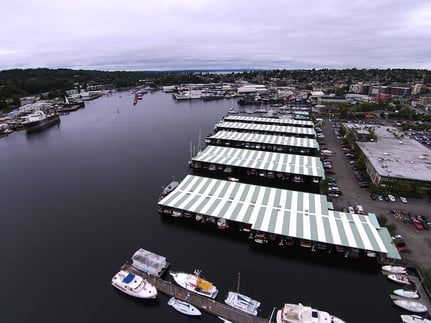 The nautical expression “to pass with flying colors” is derived from when ships would come back from battle with their flags flying to indicate they were victorious. On the Stimson Marina in Seattle, this phrase has another meaning. The green-and-white-striped roof on Seattle’s largest covered fresh-water marina located on Salmon Bay is not only the marina’s signature trademark, but it is also a geographical reference point to pilots.

“If you can locate the Stimson Marina and/or the Space Needle, you know where you are,” said Brent Howell, facility manager at Salmon Bay Center in Seattle, who oversees
the Stimson Marina.

Thus, when the C.D Stimson Company decided to replace the Marina’s 50-year-old metal roof, it wanted to make sure the new roof was able to sport the same green and white stripes as the old roof. The new roof also had to be watertight to protect the 200 boats under its five docks, and installation of the roof had to follow environmental guidelines so as not to harm the salmon run that it abuts.

Howell said they considered several options for replacing the old metal roof. “My initial thought was to tear everything off and put on a new metal roof,” he explained. “But working over the boats and a myriad of environmental concerns regarding the water made that option not very feasible.” 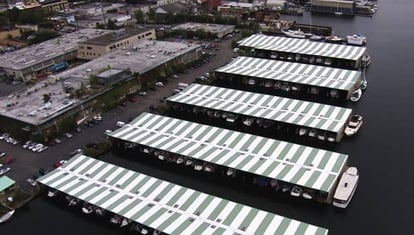 Fortunately, building envelope consultant Wetherholt and Associates Inc. of Kirkland, Wash., came up with two other options. One was to install a new metal retrofit roof on top of the old roof with sub-purlin framing, and the second option was to install an induction welded thermoplastic single-ply membrane over a high-density cover board as an overlay system.

FiberTite’s four-layer technology includes a one-of-a-kind adhesion coat that fully saturates the base fabric, forming a molecular bond between the back and face coat, providing maximum resistance to delamination in the event of wind uplift.

Rhinobond, designed for use with thermoplastic roofing systems, uses advanced induction welding technology to bond the membrane directly to specially coated plates that are used to secure the insulation to the deck, all without penetrating the roofing membrane. The result is a roofing system with improved wind performance that requires 25 to 50 percent fewer fasteners and plates and up to 30 percent fewer membrane seams to weld on the roof. 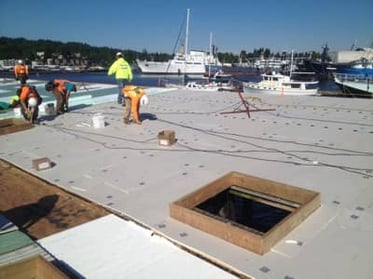 In addition, since the fastening points are spread out across the roof deck in a grid-pattern rather than concentrated in the seams of the membrane, the wind uplift load is distributed more evenly. The result is less point loading on each fastener, enabling the system to achieve higher wind ratings with fewer fasteners.

According to manufacturer’s representative Ian Murphy of Exterior Allied Systems LLC in Portland, Ore., there were several advantages to using the Fibertite RhinoBond system. ‘’FiberTite weighs less than a metal roof and with its hot-air welded seams has better watertight integrity,” he said. “the RhinoBond system allows the membrane to be attached directly into the wood purlins under the metal panels and was an excellent way to meet the FM 1-90 wind uplift requirement.”

Howell said there were also significant cost savings. “I think we came in a couple of hundred thousand dollars less than if we had gone with a metal roof,” he explained. “If we had done a complete tear-off, we were probably looking at another million dollars.” Finally, the FiberTite membrane could replicate the green and white stripes as well as a metal roof. 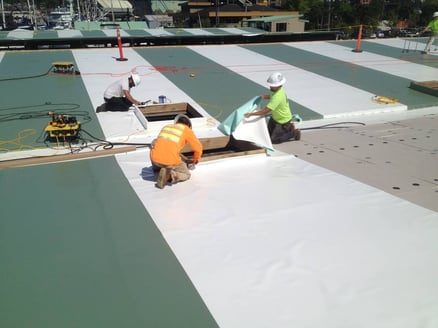 Axiom Division 7 faced several challenges with the installation of the new roof, which included ½-inch Fibertite HD board over the metal roof and tapered insulation in the valley. A major concern was working over the water.

Not only were there environmental rules about preventing debris from entering the water, but the safety of the roofers also had to be considered.

“We tied off the crew whenever possible and also had life rings on the roof just in case,” said Jeremy Parriera, president of Axiom Division 7. “Capturing the debris was challenging because there was a significant amount of deteriorated plywood under the valleys that had to be replaced, and every time we cut a piece we had to contain it. That wasn’t always easy, especially in a breezy location as this.” 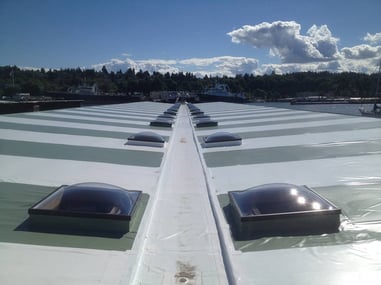 Another challenge was installing skylights, which replaced translucent panels in the  metal roof. “There was some deliberation about how to from the curbs and install the curb-mounted skylights,” explained Joe Laurean, field engineer at Wetherholt and Associates. “They wanted to keep the same layout that they had with the translucent panels, which required some careful framing work.”

It was the green and white stripes that probably posed the biggest challenge, however. When preparing to heat-weld the Fibertite membrane to each of the RhinoBond plates using the RhinoBond stand-up induction tool, it was discovered that ambient temperature was warmer for the green membrane than for the white membrane, which required some fine-tuning of the Rhinobond induction welding machine. “Fortunately our OMG Roofing Products representative was quickly on the scene and worked diligently with us to come up with the proper calibration,” Parriera said.

Lining up the stripes was also tricky. “The five docks are different sizes, but we wanted the stripes to look continuous from one dock to the next,” Parriera said. 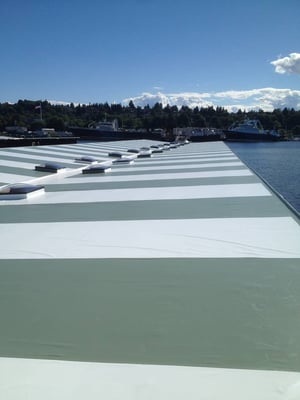 “Alignment of the green and white membrane from building to building was really facilitated with the RhinoBond system because you could adjust the membrane before you the induction welding,” Murphy said. “Axiom Division 7 did a great job with this project. They are a tremendously organized, painstaking contractor.”

In fact, teamwork played a huge role in the success of this project. “There was regular coordination with OMG Roofing Products, FiberTite, Axiom Division 7, Wetherholt and Associates Inc, and myself,” Murphy said.

Howell added, “Everyone worked in a professional manner and knew what they were doing. We were every appreciative of that.” 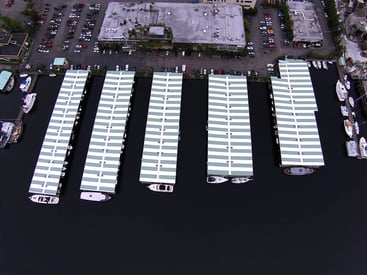 Currently the roof is performing well and nothing but smooth sailing is expected in the future. “The roof is doing great, and I would definitely recommend this system again,” said Laurean. “It is easy to install, and it met the owner’s expectations.”

“Everyone is extremely happy,” Parriera said. “I would absolutely use the FiberTite RhinoBond system again, and in fact, already have another installation lined up.” To check out the roof in real time, visit www.stimsonmarina.com and use the Web cam.